Let us now bask in the beauty of Mireille Mathieu via the plethora of pictures of her in her album "C'est l'amour et la vie que je te dois"... 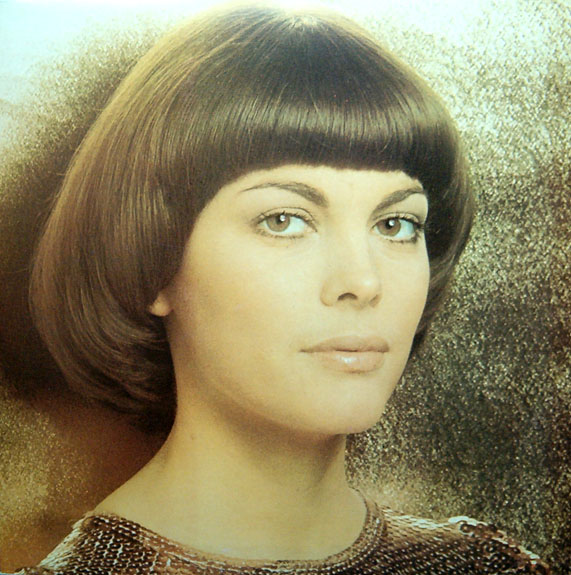 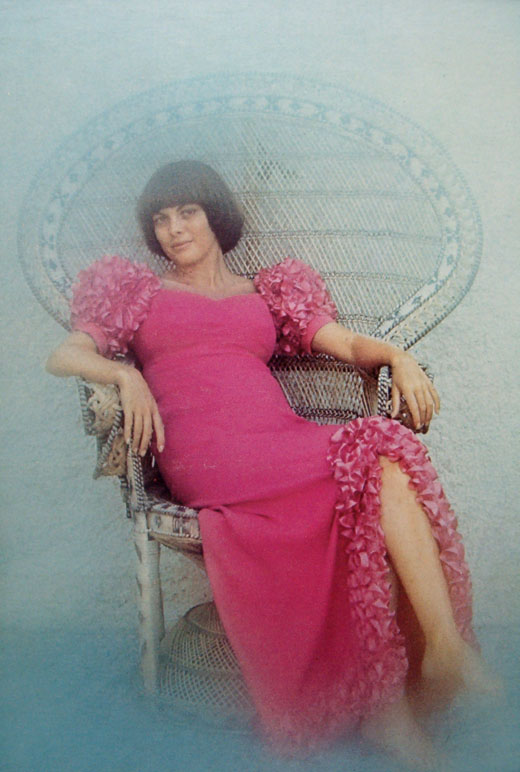 Back cover. (surrounded by plain black)(or it is the actual front cover and the front cover pic above is actually the left gatefold and the credits pic below is the back cover? I've folded it both ways to see that the spine is still viewable and I'm not 100% sure... Whatever! Back to Mireille!) 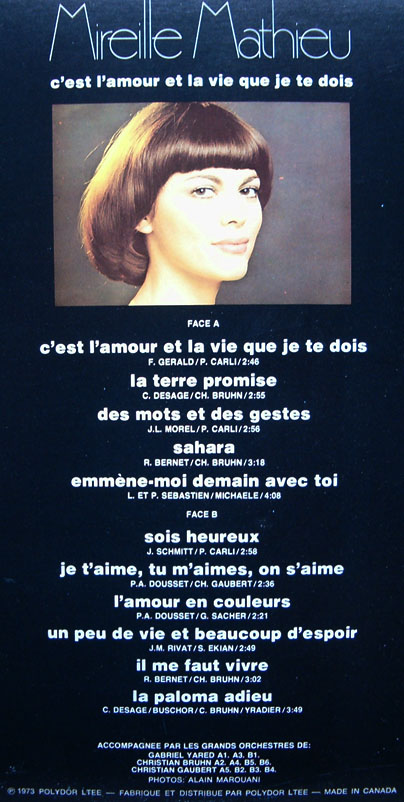 Inside credits, also surrounded by black. (that's how it ends up when closed and still allowing the spine to be read, anyway) 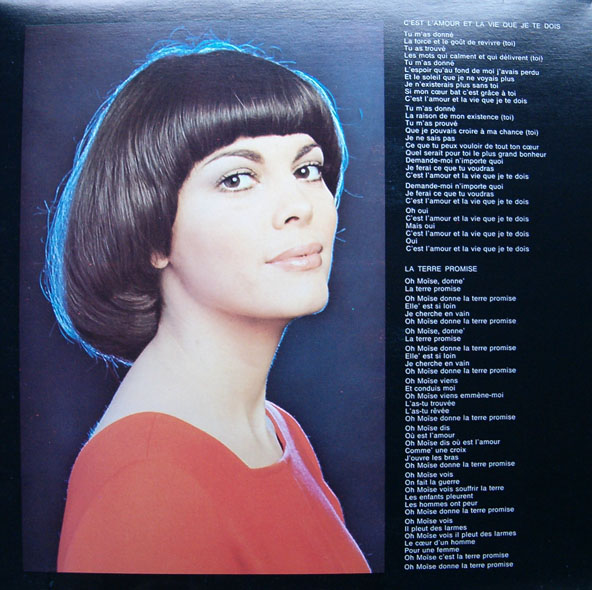 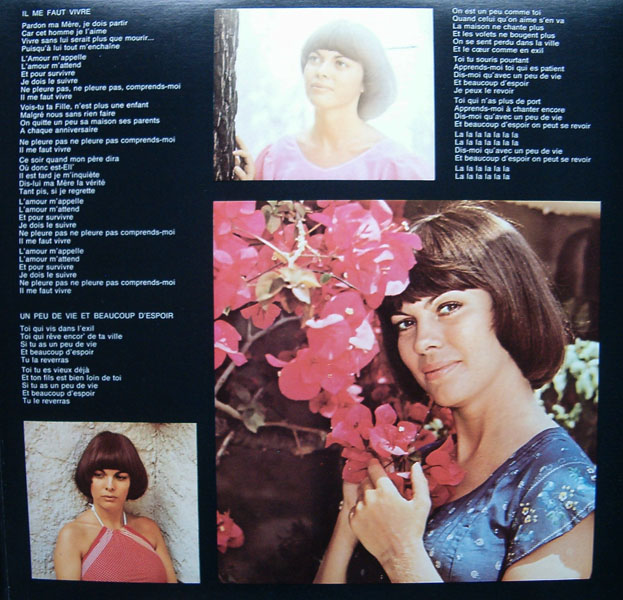 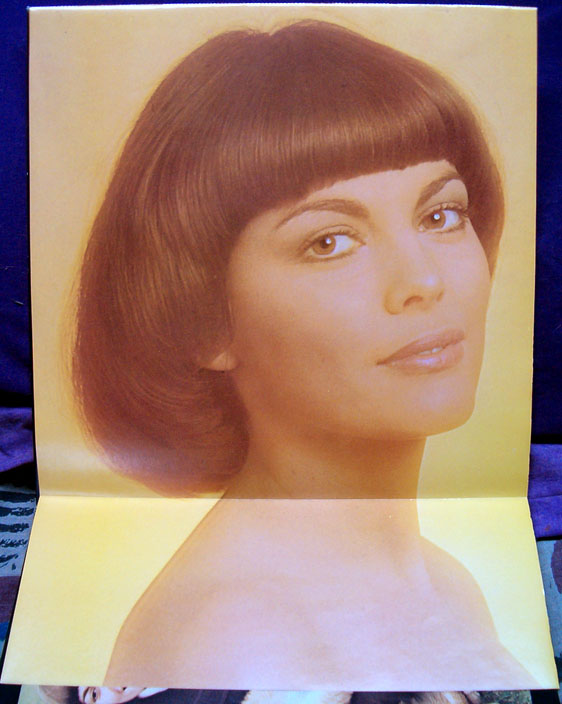 Quite the packaging.
Posted by Ripplin at 12:59 PM No comments: Links to this post

I bet you guys didn't even know he existed! 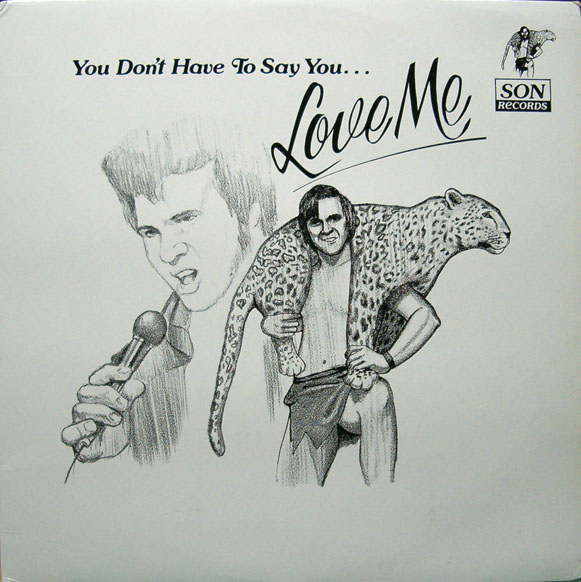 Pretty vague cover. Sure, the guy on the left is obviously supposed to be Elvis, but what's up with Tarzan?

SON Records. Cute. A play on the Junior part and a play on Sun Records, where Elvis recorded. 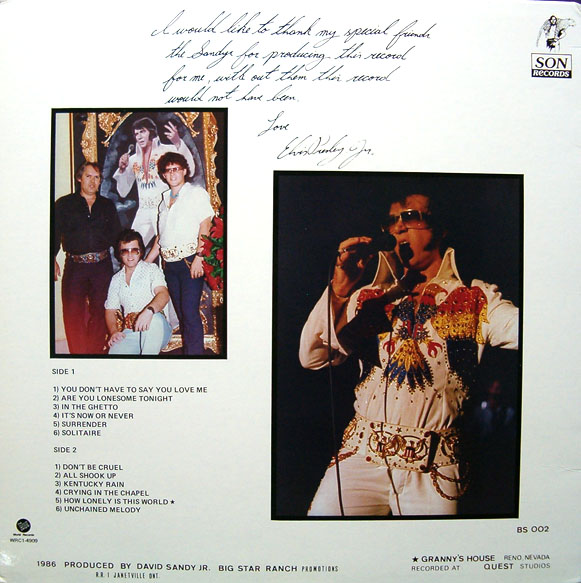 His being from Ontario (I'm assuming this is a local record) is not a surprise, as they hold an Elvis festival every year in Collingwood. Recorded in Reno is appropriate to the jumpsuited Elvis, though. Notice the one Junior is wearing is the same as in the painting. Ditto the belt.

Appropriate that the serial number of the album is BS 002. Haha. ;) 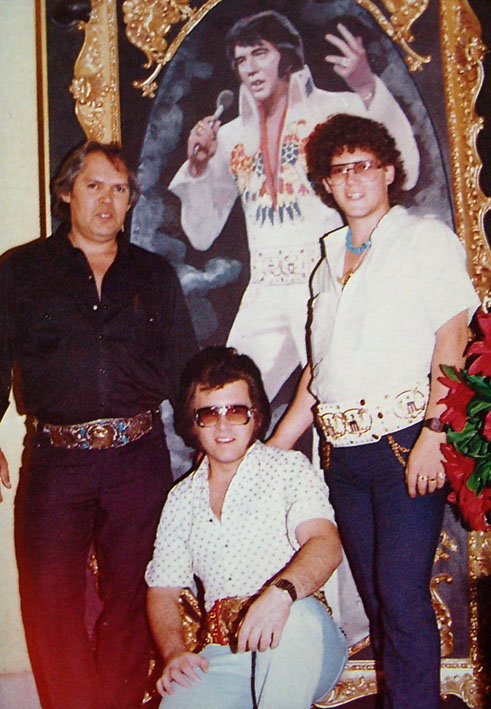 Father and son together, sorta. Dig them belts! The ones that Elvis Jr. and the guy on the right have on look like those skinny old wrestling belts. Or super ornate weightlifting belts. Or those old motorcycle belts. 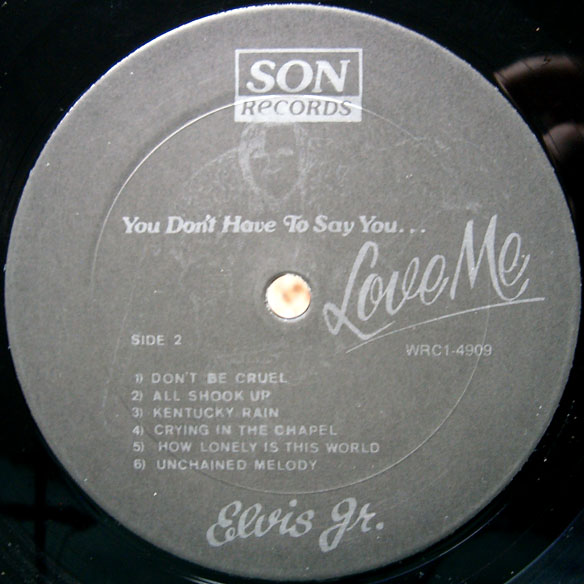 Just for why not. I haven't listened to it yet. He better be really good to use that monicker...

Posted by Ripplin at 3:01 PM No comments: Links to this post 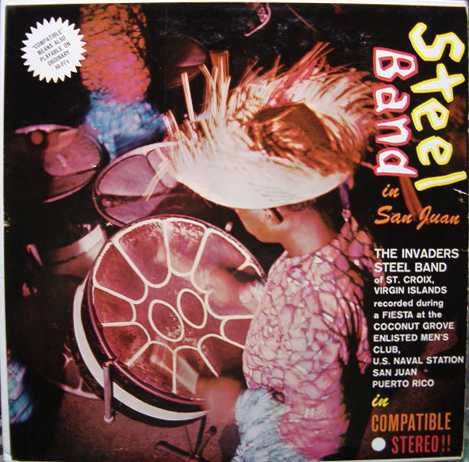 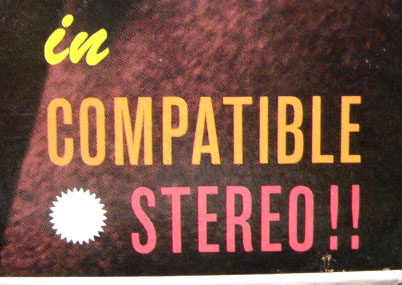 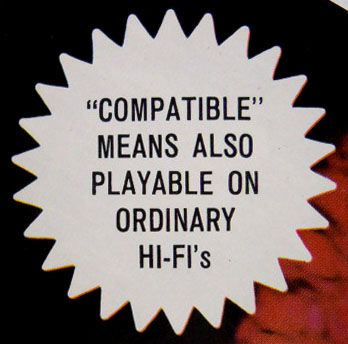 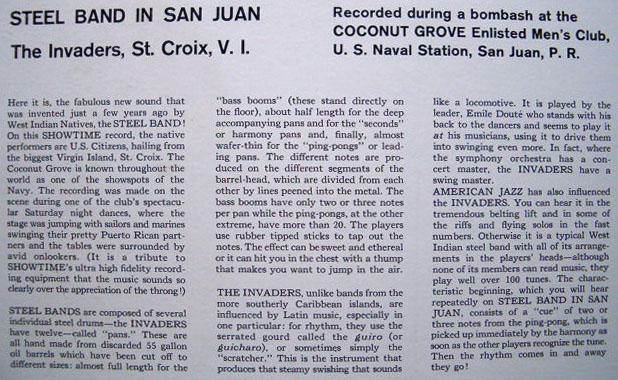 "Bombash" is um...not at mirriam-webster.com, which is my first stop for definitions. I guess it's just old slang for a dance attended by military personnel. You know, with the bombs and whatnot.
Posted by Ripplin at 12:11 PM No comments: Links to this post 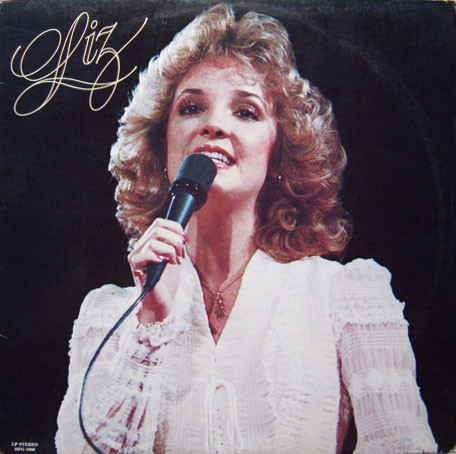 Simple, classy cover. So, she's Liz...who? Let's check the back. 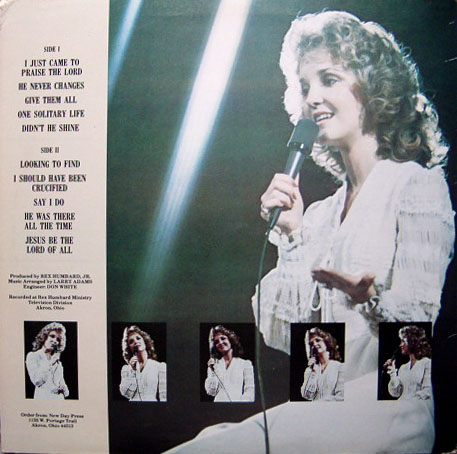 Does anyone know her full name? 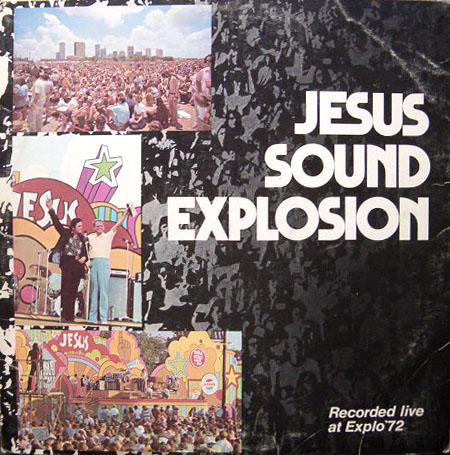 Nice looking cover. I guess Explo is short for Explosion? I would've thought Exploration. (and it's an obvious take on Expo) 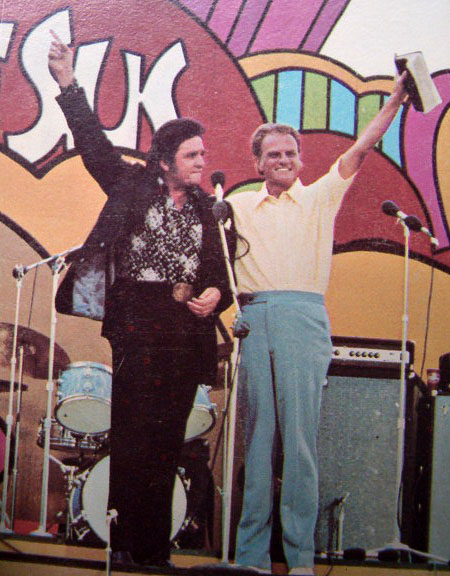 The headline act, Johnny Cash. I wonder if he did it for free... 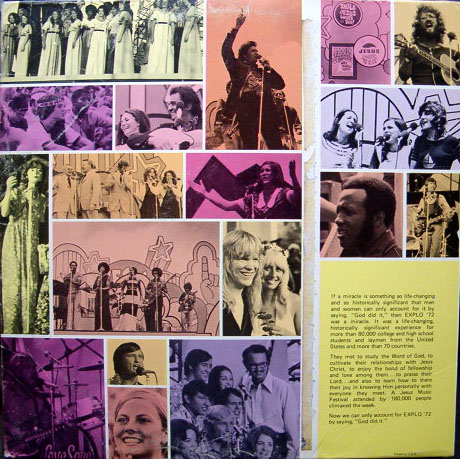 Love the multiple colors...scheme. Very indicative of the period. Looks like the Partridge Family bus. :p 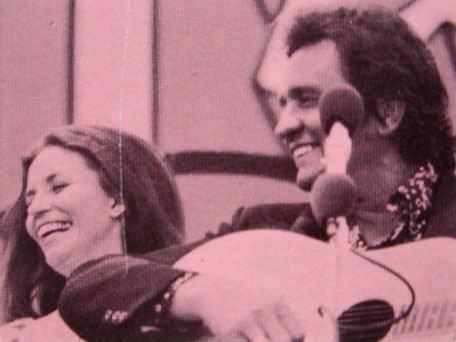 Johnny again with his wife June. 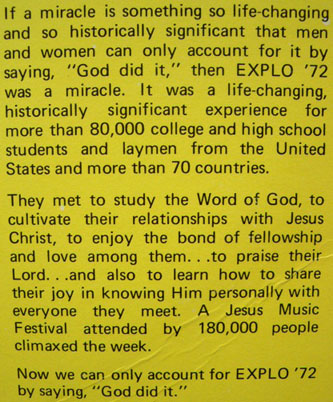 According to the site meetjesushere.com, "This live album was recorded at the Explo in 1972 (Dallas, TX.) and was only available through the mail. [and the event was also televised] Life magazine had a six page article on the festival in the June 30, 1972 issue.
Other artists: Johnny Cash, The Armageddon Experience, Randy Matthews, Andrae Crouch & The Disciples, The Great Commission Company, Danny Lee & The Children Of Truth, Connie Smith, The Forerunners, Willa Dorsey, Love Song and The Speer Family."

Posted by Ripplin at 3:16 PM 2 comments: Links to this post 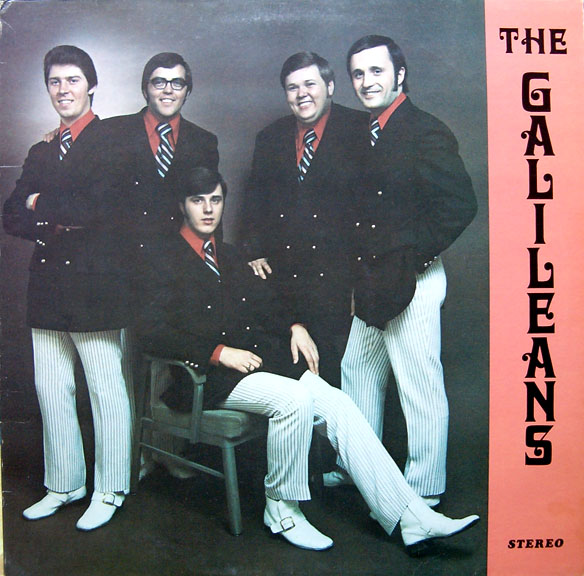 Seriously, those shoes, those stripe-ed pants (shout out to Homestar Runner*)... Those are some righteous brothers in the Lord!

I bet they're not from Galilee, though. 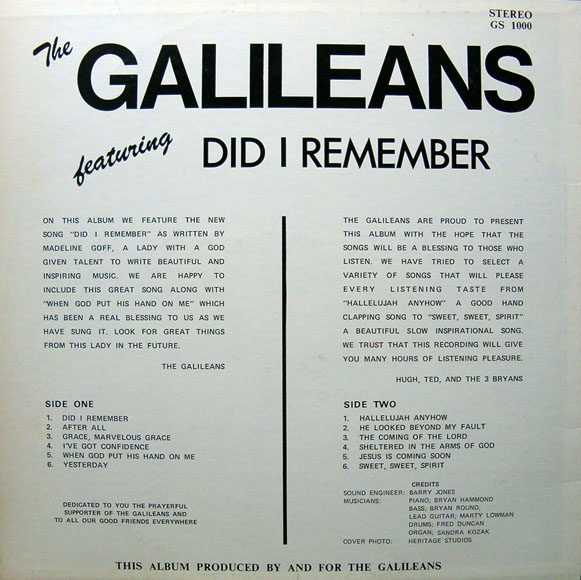 Doesn't say where they're from, but I still doubt it's Galilee. ;)

Does anyone else think 'produced by and for The Galileans' is kinda funny? By, yes. For? Well, kinda sounds to me like they only made it for themselves, no? Haha. 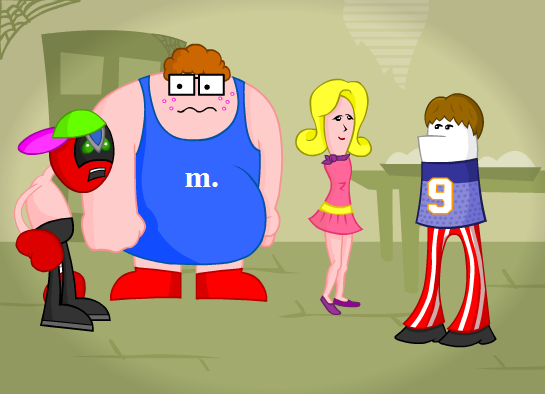 Stripe-ed pants. ;)
Posted by Ripplin at 2:48 AM No comments: Links to this post